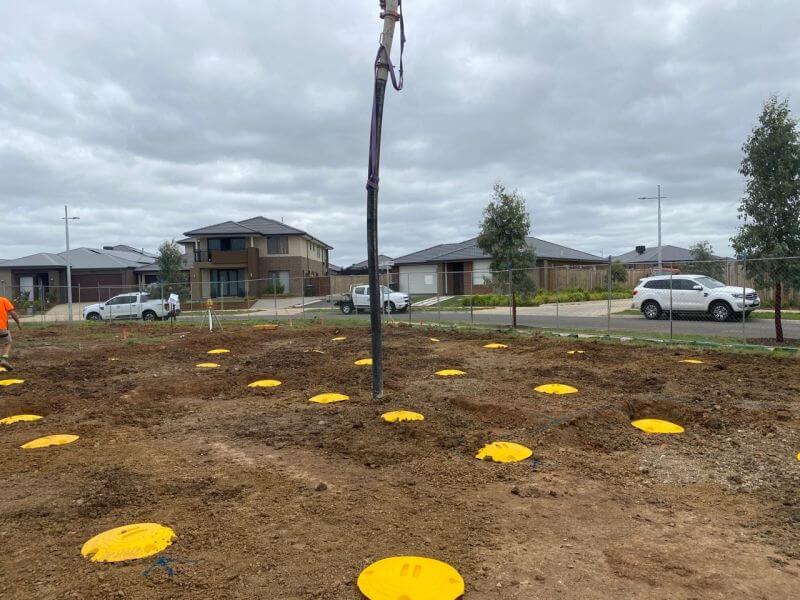 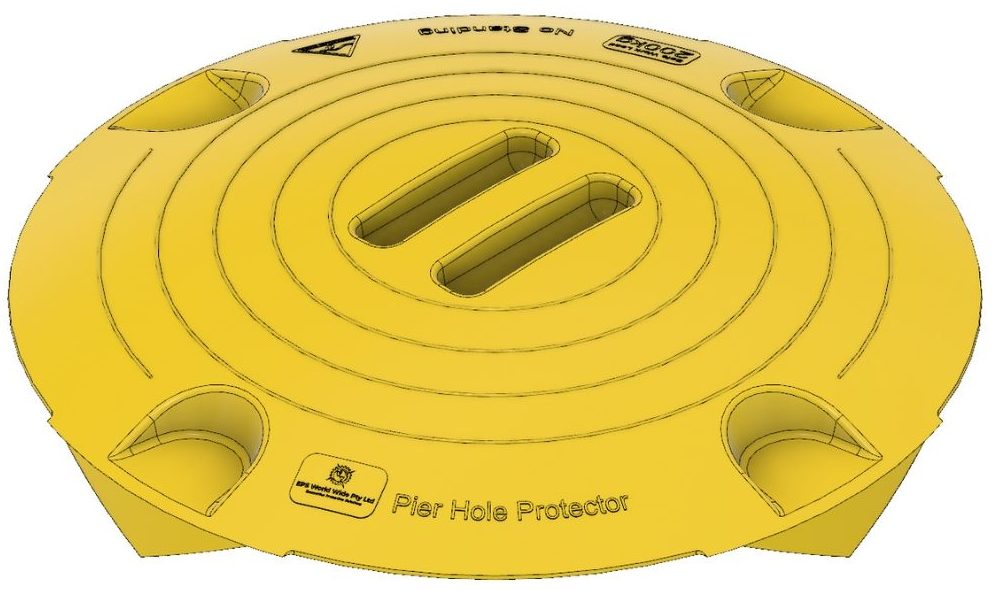 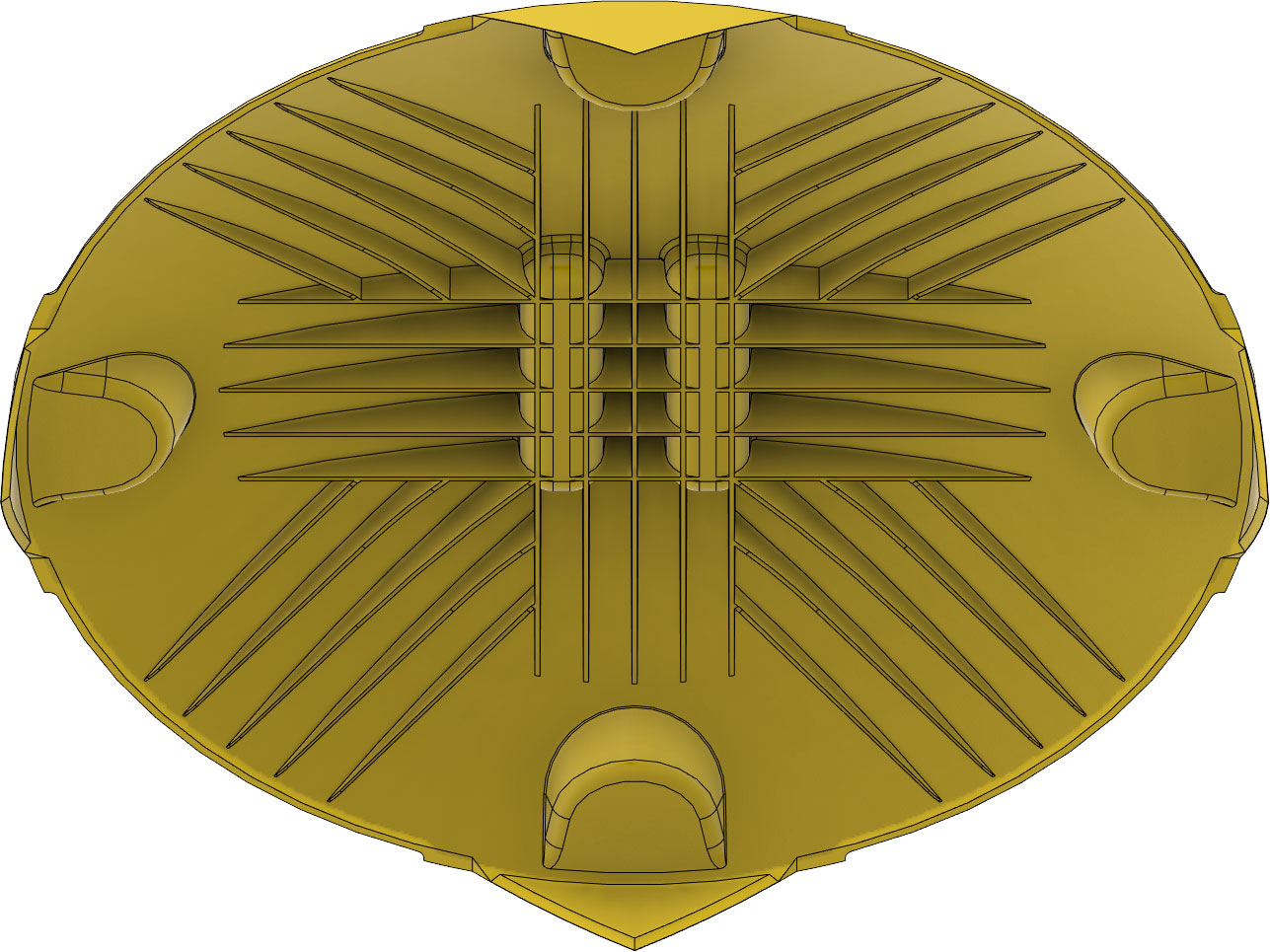 A heavy-duty polypropylene cover that completely secures the top of a freshly excavated pier hole until concrete is poured.

4 teeth secure it into the surrounding ground ensuring it does not move.

Eliminates the risk of falls into the pier hole, rubbish and debris entering, and the risk of the hole filling with water from unexpected weather or other forms of direct water flow.

• Made from a heavy-duty PP with UV protection package
• Durable and strong
• Stackable
• Centre grab point and recessed strike points to secure teeth into ground
• 200kg safe work load – FEA tested and RPEQ certified
• Anti-slip
• Available in a range of fluoro safety colours
• Customised with company logo
• Option for manufacturing out of 100% recycled material or virgin material, which can then be recycled
• 100% owned and manufactured in AUSTRALIA
• New to world product – there is nothing available like this in the market 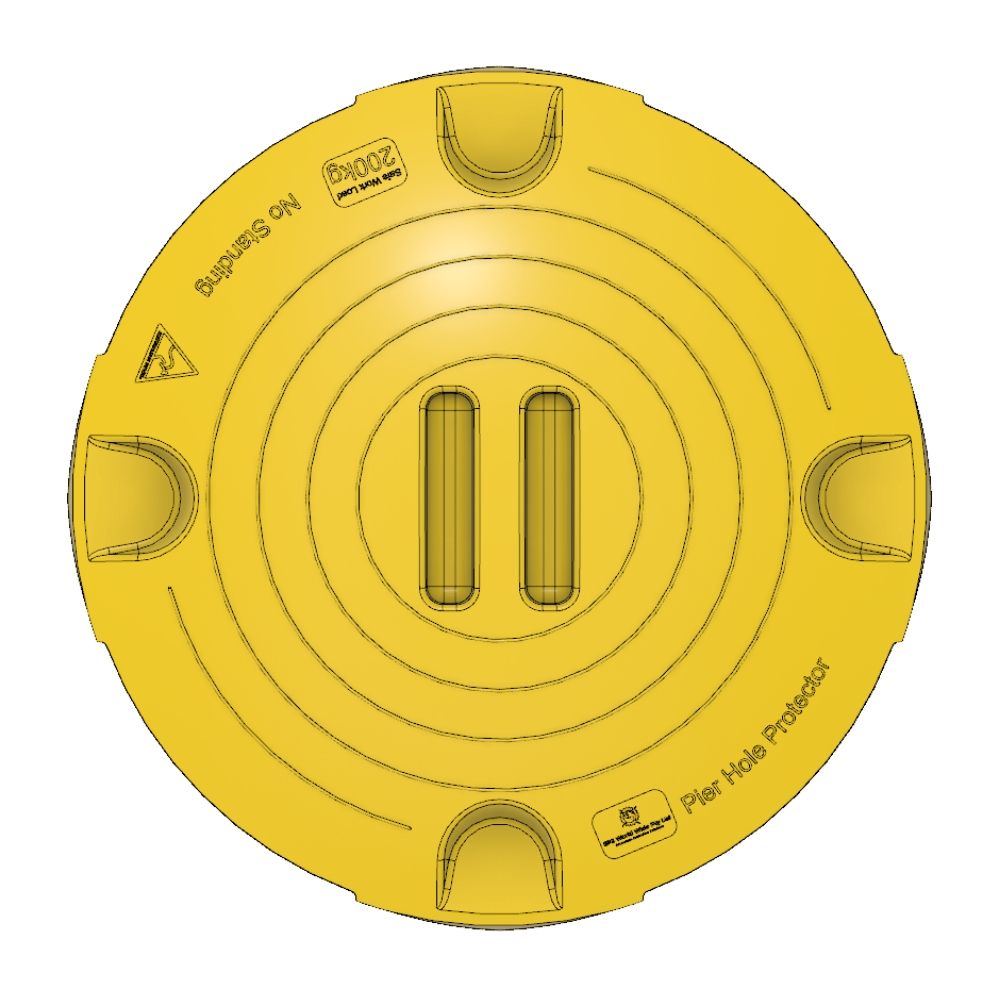 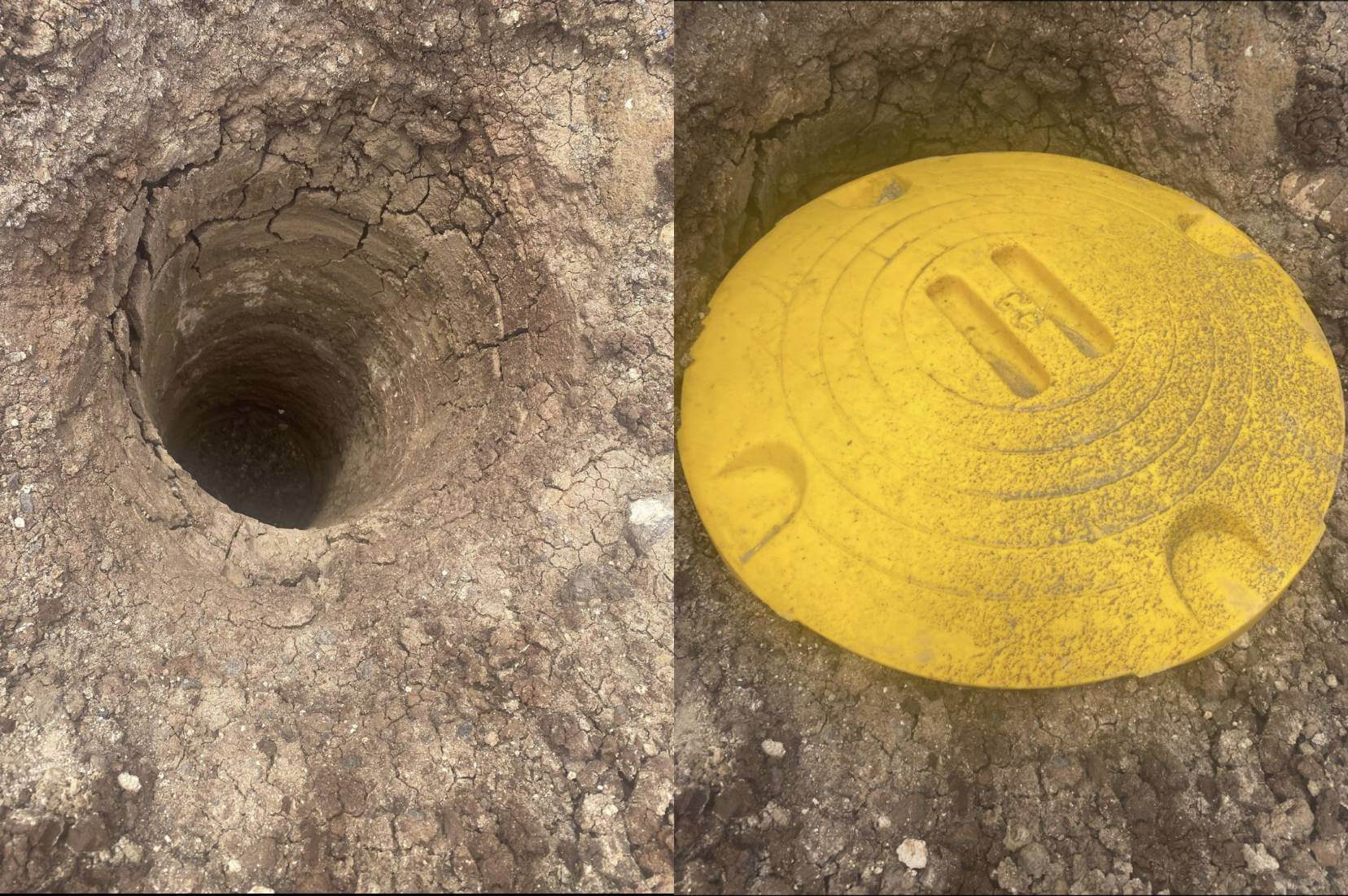 By safely securing the open excavation, the risk of a fall is dramatically reduced.

It is illegal to leave an excavation open and uncovered for any length of time, regardless of if the site is secure.

Current practice is to cover pier holes with plywood, which is then often thrown out after being removed.

Plywood is expensive, time consuming, wasteful and against WH&S regulation.

Simply using plywood is not the answer.

When a pier hole fills with rubbish, debris and water, it is costly to clear them out.

By covering them with a pier hole protector as soon as the hole is dug, the risk of if filling up with unwanted matter is minimised.

It is believed he was trying to retrieve his dog, who was also found in the hole.

In recent years, the laws around WH&S on construction sites have been heightened and there is a zero tolerance to negligence.

There have been too many accidents and deaths already.

Prison sentences and large fines are now being handed out to foremen and company owners who are found to be neglectful.

Cover your pier holes, reduce the risk of falls, injury, and death.

In 2016, we built our family home in a residential street in Mudjimba, Queensland.

The house required 50 x 0.450m pier holes, and these had to be left open for 2 days until the concrete was poured alongside the slab.

As a parent, I was extremely concerned about these holes and what would happen if a child fell into one.

While we ensured we had the required fencing in place to secure the work site, we found that there were children and pets roaming the street, unsupervised, and that they were at risk of not understanding the dangers involved in entering a secure building site.

I called several construction supply hire companies in search of an item to cover the pier holes, only to find there was nothing available, aside from purchasing some plywood and using that to cover the holes.

The issue with plywood is that it’s expensive, and once it has been used, it is usually thrown away – what a waste!

Then, in 2018, we built another house and had to excavate pier holes.

One night, we experienced a heavy downpour of rain that resulted in the pier holes overflowing with water.

The cost to drain these holes and rectify the issue amounted to over $15,000!

There had to be a product that could solve both these dangerous and expensive problems – right?

Well, back then, I certainly couldn’t find any!

However, during my research, I did find that in 2008, a man in his 50s died on a construction site from falling headfirst into a 1.8m pier hole with a 0.450m diameter. It is believed he was trying to retrieve his dog, who was also in the hole.

After reading this article, and from having experienced firsthand the issues that could arise from not properly covering these pier holes, I decided that something needed to be done to effectively cover open pier holes, both for safety, and to save the holes from collecting water, rubbish and debris.

And using plywood was not the answer – although it has been loosely accepted as the ‘industry standard’, despite being against safety regulations; not to mention, it is also costly, time-consuming, and an enormous waste of resources.

So that’s how the Pier Hole Protector was born.

PROTECT YOUR WORKERS, PROTECT THE PUBLIC – NO ONE DESERVES TO BE INJURED DUE TO SOMEONE ELSE’S BLATANT DISREGARD FOR SAFETY.

THERE ARE NO EXCUSES ANYMORE FOR NOT COVERING A PIER HOLE PROPERLY.